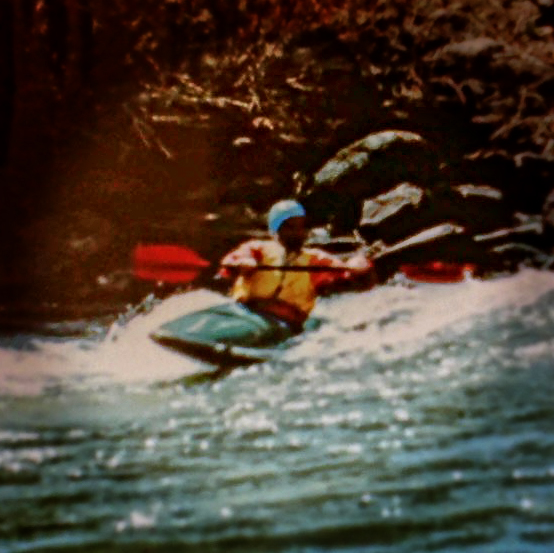 I have had some very interesting teachers over the years and after my playtime, this morning engaging  in Ta Mo’s 18, Muscle Change Classic , and Marrow Washing the three  staples of Northern Shaolin Kung Fu.

I had this strong image come to mind  of the man pictured above. ( Yes it is a terrible picture, you can’t see his face and the reproduction is even worse than the original, however, it is Roget Paris, and the only shot  I could find.;)   Roget Paris was a mountain man phenom, legend had it that when he was 18 he was brought over from Switzerland to help to train the 10th Mountain Division for their assault in Italy during World War 2.  I did not meet the man till 1984, really 1985 when I took a class from him on Kayaking.

He was probably 62-65 at the time, rode his bike to school most mornings from Redstone, Colorado 45 miles through windy mountain roads to the Spring Valley Campus outside of Glenwood Springs, then trained the ski team running with them all of the way, then the Mountain Orientation team, then  taught Kayaking on the Crystal river, then rode his bike back home.  He was a beast!  Though there are many stories about Roget, some I even witnessed, The one I remembered this morning had to do with a kayak lesson on the Crystal River.  It was April, the river was moving very quickly, and it was snow a few hours before, so it was very cold.  The lesson of the day was just to ferry across the river and end up directly across from where you started. Ha! Impossible!

The  cold torrent of water flowing downstream, waves and eddies and currents faster and slower, not to mention the fear of swimming in that cold water, and rocks, tree branches, knowing that if you tip over and your Eskimo roll doesn’t work you will end up half a mile down stream  before you can drag yourself, your boat, and paddle to the shore dripping wet and cold. Then I saw something absolutely mind blowing. He paddled three or four times from the bank headed upstream , then without a single stroke of the paddle navigated the current, with some kind of magical lightness of being  and ended up on the other side of the river upstream from where he started.

Excuse my french here but is was truly a “No Fucking Way!” moment. It could be done, I had just seen it. With the adeptness and reflexes of a cat, he just found the perfect line of the boat, mind, current and water and ferried to the other side without even a single stroke of the paddle. Not even a little bit tense, and actually he was giggling.  Perfect timing, perfect leverage, and flowing with the river not against it. What happened to us, the students,  was a comedy of errors and effort, wet and cold, boats and people floating downstream, arms and bodies  exhausted from effort  and moments of success and all of us in one degree or another fighting the current.  I still hear Roget  yelling “Lean Downstream! Don’t fight the current! “and I haven’t been in a kayak for years.”

After my playing this morning, I started giggling about Roget.  Knowing this is what it is like to meditate. Distraction racing towards you , fears, worries, and disbelief that anyone could ever make it look easy to navigate through the constant stream of thoughts and feelings.  Also knowing, that it has been done, with right thought and right action, and intuition.  I have seen the same laughter and giggling from my Sifu. I have felt it at times in myself. “Don’t fight the current”! “Lean down stream!”  It can be done.

How do you engage a mindful life?

This is the question. How do you engage a mindful life? First, Pay attention! Then pay attention!